NCHSE takes up the implementation of projects. Implementation of projects includes the execution of medium to large scale projects of development in rural areas, village or cluster of villages and such programmes may cover integrated development of villages. This involves activities of water conservation, water harvesting, soil conservation, land development, agro-forestry, plantations, grass/fodder development, biogas, manufacturing bio-fertilizer etc.. The implermentation of other programmes such as community organization, self help group formation, identification of income generating activities, skill development, credit linking of SHGs, creation of revolving fund and other similar activities are also undertaken. A few of the important projects are mentioned below:

NCHSE has made large contributions on the front of water conservation works. The adjoining photograph is an example of one of such works, which depicts a dam constructed at fairly reasonable cost, in record time, at Gailor village of Jhabua. Ensuring peoples' participation this magnanimous structure was erected. The total cost was barely Rs 10.75 lacs. The dam has dimensions as:height-8 meters, length-52 meter, gates-3. This has irrigation capacity of 75 Ha. area.

The Other view of the dam

A couple of projects under the United Nations World Food Programme (WFP) are being implemented in Jhabua and Hoshangabad districts. This programme facilitates micro planning and participatory development of selected tribal forest villages. NCHSE has taken up village Badlipada of Jhabua district and village Dodi of Hoshangabad district under this programme. Community organisation and economic progress with the support of village development committees are the thrust points of the programme’s objective. In village Dodi there are 78 families out of which 62 families are landowners. Total geographical area of the village is 121.87 ha. Prior to the project only 90.6 ha. land was cultivated. There was no irrigation at all. Through construction of one earthen structure and the deepening of four wells, 118.00 ha. land has become irrigated and all the 62 families have benefited. Moreover, there are 16 landless families that have got benefits from other income generating activities. Before completion of this project, village development committee set out the rules for maintenance of the physical assets created under the project. On completion of the project, the village development committee has started taking care of all the activities themselves. In village Badlipada, the villagers protected 360 ha. of forest waste land (a hill piece of land) for fodder development. Women empowerment has been sought to be achieved through forming self help groups. Five women self help group were formed, with 54 members. These groups are regularly saving money in their saving fund and are utilizing the amount for giving loans within the group for various small needs of the members. Out of 54 group members, 24 women were engaged in various income generating programmes. Presently NCHSE is implementing WFP programme in two villages Koyadhariya and Amba of Jhabua district. In these villages social mobilization is one of the major activities. Under this a large number of people are associated with the programme of using organic manure and non-conventional energy sources like biogas. This reflects the peoples' participation in the development process. Giving up of liquor consumption, reduction in the number of child marriages, promotion of education, health and hygiene is not only very much appreciated by villagers but they are also taking initiatives in these activities.

A process oriented and integrated socio-economic development of selected tribal villages through peoples' participation in Jhabua district has been financed by CASA (Church's Auxiliary Society for Action). The project focuses on:

A number of night classes are organized in nine project villages of Jhabua district. The basic objective of the project is to educate people informally. Presently out of a total of 817 persons, 304 female and 337 male and 176 children are attending these night classes. Prior to the project there were 303 boys and 148 girls enrolled in the local schools. Presently 637 boys and 371 girls are attending school.

A unique feature of this project has been to bring the people/community together through organising cultural activities. To enable them to think and try to solve their social problems by themselves, this cultural activity is perhaps the best source. Street plays and various competitions designed to build up a positive attitude on issues of importance are successful instruments of social engineering. There have been visible results of such cultural activities viz. reduction in the number of child marriages, controlling the number of children, avoiding the curse of dowry etc.

From the point of view of sustainability an apex body has been constituted. The committee members are nominated by the villagers of the nine villages under the project. These members elect the President and the Secretary of this body. This apex body functions with the object of solving the local problems with the support of the community and the government agencies.

Integrated socio-economic development of five selected villages of Jhabua block of Jhabua district is sponsored by CAPART (Council for Advancement of People’s Action and Rural Technology), New Delhi. Since the past 3 years, project activities are being undertaken by NCHSE. Soil & water conservation and social mobilization activities are successfully carried out in the project area. Some of the notable results are:

Baba Ambedkar Hasthashilpa Vikas Yojana (AHVY) sanctioned by the Development Commissioner, Handicraft, Ministry of Textiles, Government of India, New Delhi. This project has an objective of training , development & promotion of bamboo crafts, bead work, tribal garments, terra-cotta and tribal doll making. Under this project the Jhabua Centre has procured about 8 machines for wood work and bamboo crafts which are under operation in Jhabua. Training programmes have been organized for 240 artisan members of the 22 Self Help Groups which are doing activities in production of various craft articles and the Centre is involved in marketing of these products through various linkages and famous exhibition-cum-sale & fairs at different places.

The Development Commissioner Handicraft, Government of India, Ministry of Textiles has also supported in a major way for the creation of a Craft Common Facility Centre (CFC) at Jhabua which train local artisans in various crafts as mentioned above by the expert designers. The CFC building has been constructed in the NCHSE Campus at Barkheda, Kalyanpura of Distt. Jhabua.

Adding another dimension to the domain of NCHSE activities, a Herculean task of constructing a women and child-care hospital in Jhabua was taken up.

Gas Authority of India Limited (GAIL) has presence in Jhabua and they have carried out several people oriented welfare activities involving NCHSE.

Similarly this mission of introducing a health care centre in district H.Q. of Jhabua was taken up assigning the task to NCHSE. Jhabua lacks health facilities and the majority of population is of poor tribal people who have no choice but to follow their old traditional methods of approaching ojhas (witchdoctors) for treatment.

NCHSE took up the challenge and has completed construction of this hospital now ready with ultra modern facilities in the heartland of the district. This has certainly come like a boon for the people of Jhabua.

It is a thirty-bedded hospital and has two core departments – gynaecology and pediatrics. It has been constructed adjacent to the Government District Hospital of Jhabua and has emerged as a strong support unit for the district health services.

The whole project, right from acquisition of land to finishing the construction and handing over was completed in record time of just five months. Organized work and efficient management was the principle followed and that is how this huge task was successfully accomplished.

Poverty alleviation through vocational training of tribal women in poultry at ‘Saheli Cluster’, Kesla Block, Hoshangabad District, Madhya Pradesh, India was sponsored by The CHC (The Canadian High Commission), New Delhi. NCHSE undertook the project from January, 2004 to April, 2006. Some of the notable results were:

Building of confidence of women members.

A special reference need to be mentioned about 58 SHGs in Kesla block of Hoshangabad district where SHGs have been formed under Swashakti Project sponsored by Ministry of Women Child Development, Government of India with the help of financial assistance from World Bank (IDA) (International Development Association) and IFAD (International Fund for Agricultural Development). This project of Women SHGs, initiated since March, 2001 has provided much needed support for women empowerment by way of social mobilisation and economic development. Representatives of World Bank have highly appreciated the efforts which have brought a change in livelihood and capacity building of women SHGs.

Targeted Intervention in urban areas of Ujjain district is being conducted by NCHSE since October, 2008 for prevention of Human immune Deficiency Virus/ Acquired Immune Deficiency Syndrome (HIV/AIDs) amongst female sex workers. The objective of TI project is to ensure effective management to provide safe sexual practice through behavioral change communication by way of condom promotion during sexual intercourse for reduction of vulnerability of HIV infection. Initially the project was slow but due to making converted efforts, motivation by a staff of Ujjain and with the help of technical support unit MPSACS, Ujjain TI project is selected as a model T.I. in M.P. during the year 2013. In view of this higher expectation, timely guidance and conducting of training programmes for the benefit of the staff is provided by a Pune based NGO, Path Finder on the recommendations of NACO/ MPSACS.

For increasing awareness of HIV/AIDS, community events and health camps are regularly organized by NCHSE Ujjain in accordance with guidelines of NACO.

every year, a large quantity of condoms have been distributed amongst more than 600 female sex workers through out reach workers, Peer Educators. In addition to it, more than 7000 condoms have been distributed from outlets at various hot spots. The Sexual Transmitted infection (STI) treatments have been provided to female sex workers through Integrated Counseling and Testing Center (ICTC), Ujjain followed by repetition of 30 per cent.

While continuing with the importance given to water conservation under its watershed projects, NCHSE strengthened its association with Gas Authority of India Limited (GAIL) under GAILs corporate social responsibility. The initiative included Wise Water Management (WWM)/Water re-use system for boys and girls ashrams located at Tarana block of Ujjain district. In fact, the basic idea of working on such innovative works with the boys and girls students of ashrams was that they will be catalytic agents and future motivators of addressing the upcoming problem of water.

The responses of the students were exemplary as they were able to express the models of development in a more effective manner. The shows, role plays and the learnings which students exhibited to the local people, parents, teachers, GAIL officials and NCHSE branch staff, it left no doubt in the minds of all concerned with the future of water that the students are, perhaps, the most powerful agents to meet the future challenge of water crisis.

Encouraged with the results of these two projects of WWM, GAIL authorities requested NCHSE to replicate these models in other ashram schools. The new proposed projects on similar lines submitted by NCHSE to GAIL corporate social responsibility are given below: 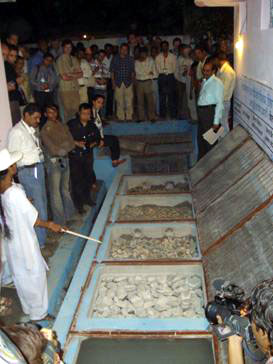 Models of the development 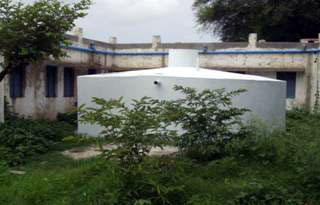